The third annual public meeting regarding the Dam and Spillway Improvement Project was held on Saturday, October 1, 2022 at noon at the Penn Lake Community Building.

Topics discussed at the meeting include:

The slides presented at the meeting are available here.

A video recording of the meeting is available here.

Sign up at the bottom of this page to receive e-mail updates about the Dam and Spillway Improvement project. 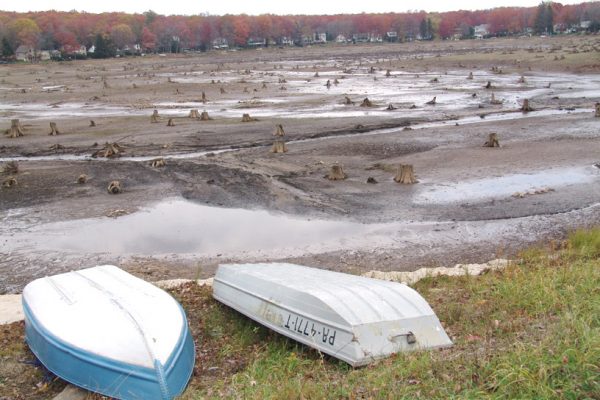 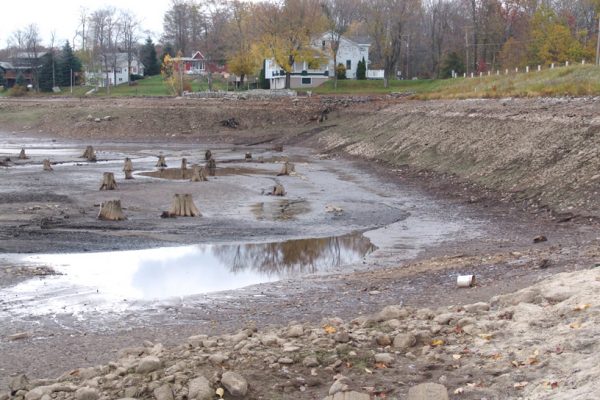 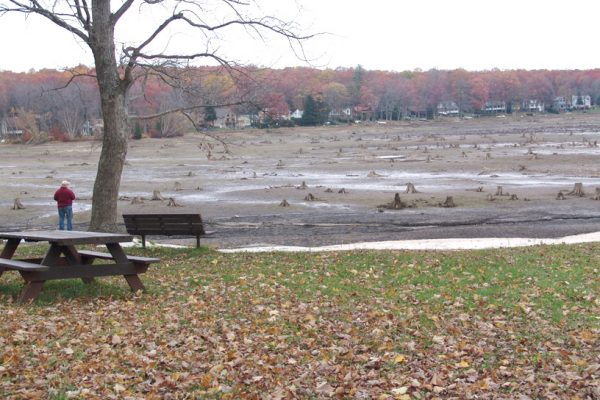 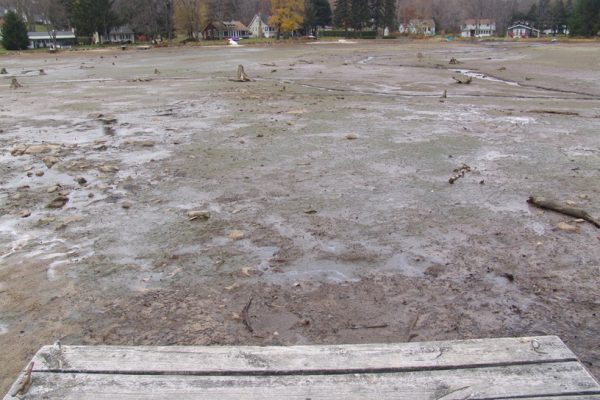 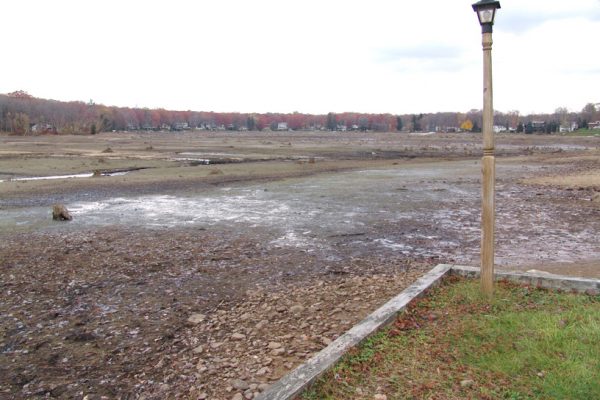 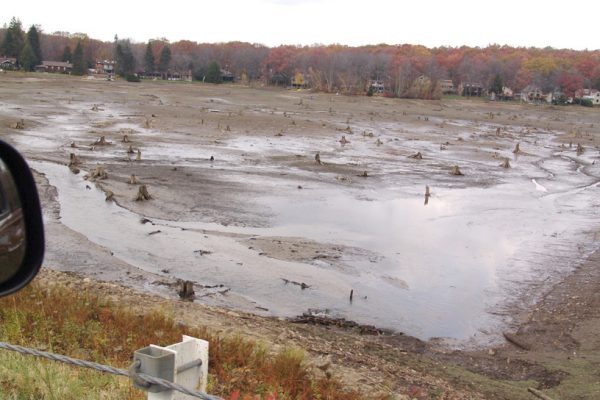 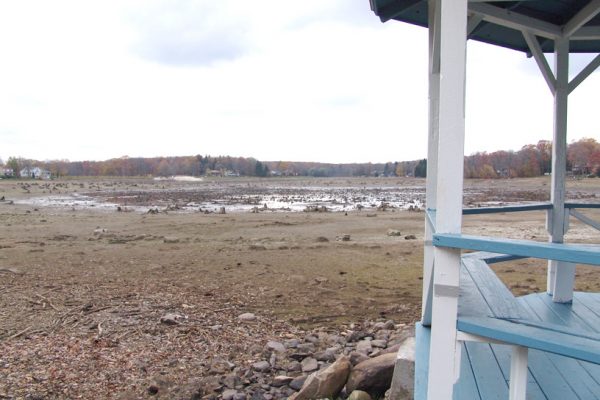 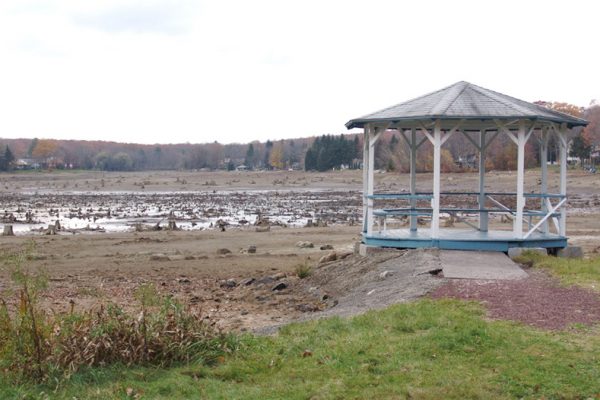 On March 30, 2020 Penn Lake Borough was notified by the PA Department of Environmental Protection (DEP) that it had designated Penn Lake dam as Unsafe. This designation does not mean that the dam is at risk for imminent failure.  But, it is 115 years old and does not meet the requirements of the Pennsylvania Dam Safety and Encroachment Act.  It is classified by the DEP as a “High Hazard Dam” because there are numerous homes that would be risk downstream if the dam failed.

In May 2020 the Borough contracted with Borton Lawson Engineering for a comprehensive assessment of the dam and to recommend repair alternatives and estimates of probable costs.  Borton-Lawson provided their report to the Borough on July 31.  That report and assessment was also sent to the PA DEP.  The least expensive alternative to address the dam deficiencies is estimated to cost $1.9 million.

On August 19, 2020 there was a meeting with the PA DEP.  The DEP had no concerns with the $1.9 million solution proposed by Borton-Lawson and is not requiring us to drain the lake prior to the commencement of dam improvements.

On Friday, February 12, 2021 members of the Dam Advisory Group met via Zoom with Richard Reisinger, Chief of the Division of Dam Safety for the Pennsylvania Department of Environmental Protection, to review the status of the dam project.  The RFP for the investigation phase of the pre-construction engineering services, which was put together by members of the Dam Advisory Group, was shared with Mr. Reisinger and we informed him of the grant applications we submitted.  He was very complimentary of the work done in preparing the RFP, offered to review any further changes to the RFP and encouraged us to keep the project moving forward. Prior to the meeting, he informed us that he did not believe that any of the Pennsylvania Act 13 grant programs would be a fit for our dam project.

On February 16, 2022 Streamline Engineering and Thoroughbred Engineering sent copies of their draft reports of the pre-construction investigation to the appropriate people at the Pennsylvania Department of Environmental Protection (DEP) to be sure that they agree with the engineers’ calculations and analyses.

In April 2020 the Dam Advisory Group was formed.  The purpose of the group is to guide the Borough in responding to the deficiencies outlined by the DEP and to keep the community informed of developments to address those deficiencies.  The group distributed the following pamphlets to the community.

VIEW THE “What’s Happening With The Dam?” DOCUMENT

On September 3, 2020 a public meeting was held at the ballfield to inform the community about the developments with the dam and to get community input. A recording of it is available here:

VIEW AND HEAR RECORDING OF MEETING

A public Q&A Session with the Dam Advisory Committee was held on October 10, 2020.    A recording of the session is available by clicking on the links below.

Written answers to questions submitted prior to the meeting are available here.

The Second Annual Public Q&A Session with the Dam Advisory Committee was held on October 10, 2021.  A recording of the session is available by clicking here.  The slides presented by the Streamline engineers at the meeting are available here.

The Third Annual Public Meeting regarding the Penn Lake Dam & Spillway Improvement Project was held on October 1, 2022.  The slides presented at the meeting are available here.

Tax Increase to Pay for Dam and Spillway Improvement Project

On August 13, 2020 the Borough Council passed a resolution to place the following question on the ballot for the November 33, 2020 election.

Shall debt in the sum of up to $3 million dollars for the purpose of constructing and maintaining a dam to control and conserve Penn Lake be authorized to be incurred as debt approved by the electors of the Penn Lake Park Borough?

This ballot question was required because the Borough Council cannot legally incur debt over a certain amount without the approval of the community.

On November 3, 2020 the referendum authorizing the Borough to incur debt up to $3 million to address the dam deficiencies identified by the DEP was overwhelmingly passed by the voters in the Borough, 222-23.

In mid November, 2020, the Borough submitted two grant applications to PEMA:  1.) a BRIC (Building Resilient Infrastructure and Communities) grant which was submitted as a two-phase project with a total request of $9,877,000; and 2.) a FMA (Flood Mitigation Assistance) grant for a project plan development request of $301,000.  PEMA review of the applications began on December 15, 2020.

On January 29, 2021 the Borough was notified that both applications made it through PEMA review and were submitted to FEMA.

On February 16, 2021 Rep. Matt Cartwright (D. – 8th Dist. Penna.) sent a letter in support of our BRIC application to the Senior Official Performing the Duties of FEMA Administrator.

On July 1, 2021, the Borough was informed of a probable FEMA FMA (Flood Mitigation Assistance) grant in the amount of $301,000.  There are still a few issues to be resolved but the grant should be awarded soon.  This grant requires a 25% match, which means the Borough is responsible for $75,250.  This grant and match money will be used to pay for the initial engineering assessment.  The Borough learned in October 2021 that it was awarded this grant.

On July 8, the Borough Council approved a motion to accept a proposal from Jim Brozena to act as grant manager.  Mr. Brozena is a consultant who was instrumental in putting together the Borough’s grant applications

On April 19, 2021 the RFP for Investigation Stage of Pre-Construction Engineering Services Was Sent to Eighteen Engineering Firms and Placed on PennBid. PennBid is a cloud-based bid management system that matches buyers and sellers of good and services.  It is used by many Pennsylvania municipalities.  A mandatory pre-proposal meeting/site visit was held on May 4 for firms that plan to submit a proposal.   Eighteen firms attended.  Seven proposals were received.  Four firms were invited to attend face-to-face interviews.

In late June 2021, the Dam Advisory Group chose the proposal submitted by Streamline Engineering and Thoroughbred Engineering. Not only was their proposal the best in terms of price, a strong consensus emerged that the Borough’s best interest would be served by contracting with them as they demonstrated a good understanding of the Borough’s needs.  Thoroughbred engineering will conduct the geotechnical aspects of the engineering assessment.

Streamline Engineering and Thoroughbred Engineering began survey and geotechnical work at the lake and along Wright’s Creek on September 13, 2021.  Their specific tasks for this onsite visit were as follows:

On January 7, 2022, the first drafts of the hydraulics and hydrology report prepared by Streamline Engineering and the geotechnical report prepared by Thoroughbred engineering were received by the Borough.  The reports included a matrix outlining six alternatives to remediate the deficiencies in the dam and spillway.

On February 15 a subgroup of the Dam Advisory Group had an online meeting with Streamline and Thoroughbred to review the draft reports.  The subgroup of the Dam Advisory Group asked the engineers to provide cost estimates for each of the alternatives they presented.  The engineers also agreed to provide additional drawings/schematics showing how some of the alternatives would affect the segment of Lakeview Drive that goes over the dam and to look at the impact that raising the pool of the lake by 8″ to 12″ would have on the alternatives outlined.  The engineers agreed to submit that information by the middle of March 2022.

On May 13, 2021 Borough Council passed an ordinance allowing it to contract for a $3 million line of credit.  Such an ordinance is required by  Pennsylvania law.

On June 10, 2021 final settlement occurred on the $3 million line of credit for dam repairs which the Borough secured from Luzerne Bank.